ORDER ONLINE AND COLLECT FROM ONE OF OUR SHOPS 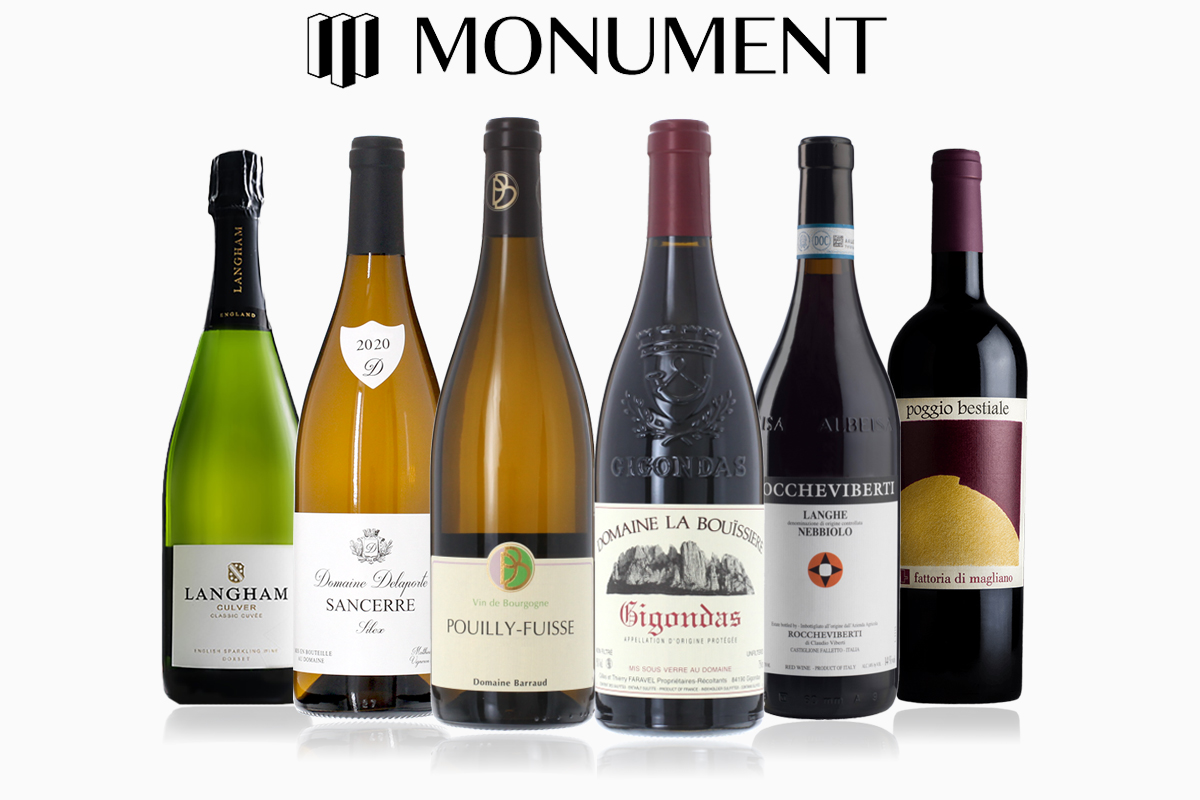 We kick this case off with a bottle of Langham’s Classic Cuvee, a wine which in 2020, won the International Wine Challenge’s best sparkling in the world, beating out everything from Champagne. This humble Dorset sparkling has a magic combination of freshness and depth – it’s a flag bearer for how excellent our home grown fizz can be. Grown in a small family owned farm, it’s a wonderful departure from the big brands across the channel and, if you serve it to your guests, they’ll never know the difference.
Food pairing: Gougeres. Little buttery, cheesy dough balls, which go so excellently with Langham.

The name here, 2020 Sancerre Silex Chavignol, for anyone with a grasp of French, gives a lot away. Sancerre is a village famous for Sauvignon Blanc – in fact, you could say it is the heartland of the grape. ‘Silex’ more or less literally translates to ‘flint stones’, which populate the soil here, giving the wine a touch of that ‘struck flint’ minerality. The other flavours are refreshingly sauvignon blanc, driven by citrus but with touches of exotic fruit and a beautiful salinity. Matthieu Delaporte, the son, is now in charge (having worked at L&S for a stint) and has converted to fully organic farming.
Food pairing: Again, this is helped if you have some French. Crottin de Chavignol is a goat’s cheese produced in the Loire and is an explosively good pairing with this wine. Both bringing each other alive in a way it’s hard to imagine. It may even convert some non-goat cheese eaters…

In the words of Allen Meadows, one of the world’s foremost Burgundy critics, ‘no one makes better wine in the Macconnais than Barraud’, and their 2019 Pouilly Fuisse Les Chatagnieres is testament to this. With the other more famous (Meursault, Puligny, Chassagne et al) villages in Burgundy becoming so expensive, this is an amazing alternative, producing a Chardonnay with unmistakable Burgundy balance, but with the extra boldness which comes of being further south.
Food pairing: The village of Fuisse is only an hour and a half from Dijon, so try this with a creamy chicken dish to bring out the richness of the wine, but with a dash of mustard to complement the zest.

I expect you’ve heard of Chateauneuf du Pape, the famous wine grown on the windswept slopes of the Southern Rhone Valley. Whilst it’s possible to pick it up a bottle for not very much money in your local supermarket, serious examples cost upwards of £50 – so, we took a short hike up the valley (about half an hour by car) to find Domaine la Bouissiere and their incredible Gigondas. This is made from the same grapes (Grenache and Syrah) but (as you can see on the label) is grown up the extreme slopes of the ‘Dentelles de Montmirail’. This altitude lends the wine a remarkable vibrancy and elegance – you still get the delicious cracked black pepper spice, but with notes like sweet raspberry and redcurrant rather than the sometimes stifling dark fruit. This wine can age comfortably for 10 years, but we challenge you to have the willpower to leave it alone that long.
Food pairing: A surprisingly good match for the spice palate of middle eastern food. Mix up with a load of merguez sausage, a Lebanese pizza or even a red bean stew.

Poggio Bestiale quite literally translates ‘bestial hillock’. Whether it’s because of a rumour that some long forgotten beast slumbers within, or whether this 300m incline overlooking the Tyrrhenian Sea is just such a beast to get to the top of, we can’t say for certain. What we do know, is that this is a really serious Super Tuscan. A traditional blend of Merlot, Cabernet Franc, Cabernet Sauvignon and Petit Verdot, it is made by none other than Graziana Grassini – the incredibly talented wine maker behind the £200+ wine Sassicaia. Coming with 7 years of bottle age, this is immediately charming. Classic cassis, blackberries and tobacco with just a hint of Italian herb. It’s really rather sophisticated.
Food pairing: Although this could be said for a lot of red wine, fillet steak is such a fantastic match here.

Barolo, ‘The King of Italian Wine’ also comes with a princely price tag, but did you know that the Langhe region where Barolo is grown also produces some seriously delicious wine from the same grape, which is grown just outside of the officially designated zone. Roccheviberti (rock-eh-viberty, even harder to say after a bottle…) makes one such wine, but this is a true ‘baby Barolo’ as the vines are all located in the region, it is made in exactly the same fashion until Claudio Viberti goes through the process of tasting and selecting the barrels he will bottle as Barolo. Expect inviting scents of dark rose petal and a very delicate, but powerful, red fruit palate.
Food pairing: Get some truffle pasta with a creamy sauce on the go and thank us later…

Another exquisite wine by this fantastic English estate. Based on the 2019 vintage this smells like a plate of buttered toast in an English country garden...

Another stellar wine from Mathieu Delaporte, so much depth and intensity, it is a true, pure expression of the Silex soil. Always with a lovely intensity...

Smoky aromas include those of petrol, apple, floral and ripe citrus. The sleeker and finer medium weight flavors possess slightly better energy on the...

A true Baby Barolo - this Nebbiolo undergoes the same harvest as Barolo, the same vinification as the Barolos. Then once made and in barrel Claudio tastes...

'Proper 'super-Tuscan' style for a less than stratospheric super-Tuscan price. This gorgeous Bordeaux blend is aged for 18 months in new Alliers oak. Still...