If ever an appellation could be considered in vogue, then Saint Jospeh could certainly lay claim to the title at present. A 50 kilometre stretch of land that travels north to south, from Chavanay to Saint Peray, along steep sloped granitic south & south east facing terraces that tuck left and right following inlets and streams down to the Rhône.

Investigate and taste a little further and it is easy to understand why winemakers have so much interest in the great terroirs and great sites. It is no coincidence that some producers in Saint Joseph are more than a match for some of the lesser names in Côte-Rôtie. For the reds, it is Syrah with 10% of Marsanne and/or Roussanne permitted in the blend. The whites are always the quintessential blend of Marsanne and Roussanne.

A love story and a bit of good fortune; a love of the Syrah grape that led Graeme to the Rhone and the love of his life Julie, who came together whilst working at the prestigious cellars of Stephane Ogier. Theirs is a back story of adventure and spirit and one of serendipity too. Our relationship with the pair stretches back some 8 years or so, when we often stopped and shared a beer after the Marché aux vins in Ampuis every January, it was no surprise when they told us they were setting out on their own journey. The surprise came when they discovered that the house they had purchased in Verin, complete with 0.35 hectare of garden, was within the appellation of Condrieu, between the in-demand Coteau de Chery and the illustrious Chateau Grillet. They quickly took to clearing and planting some Viognier and this year is the first vintage of Condrieu Lieu dit l’Aleau and, with 934 bts & 60 magnums, it is going to be in demand. Graeme & Julie like to pick early to capture the freshness, the wines tend be expressive, bright and pure. Watch the videos: Domaine G&J Bott or Condrieu Lieu-Dit L'ALEAU. 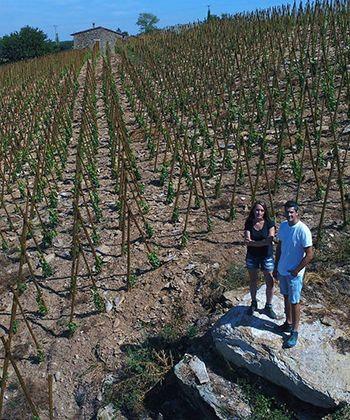 Husband and wife team Ludovic & Corrine are certainly pushing their small domaine in the right direction, fashioning some remarkably good wines from their miniscule 3.7 hectare estate. With 3 of those hectares in Cornas making traditional, rich, formidable wines, made with whole bunch ferments and minimal intervention with wild yeasts, these are wines with a structured sense with good tannin balance. Two wines are made, Terre Brune (burnt earth) and the fresher Pur Granit, along with a small amount of excellent St Jospeh red from 0.4 hectare and a white from 0.3 hectare, production is tiny, the wines sought after, long lived and serious. Cornas is definitely on the rise again, not quite the noisy neighbour of Hermitage, but justifying the renewed global interest. 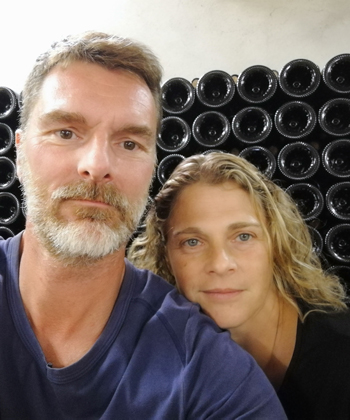 This estate is on an upward trajectory; every time we taste the wines we are impressed. Unusually for a domaine in this part of the world, they are white led with nearly 70% of the production dedicated to the beautiful but fickle Viognier grape. The Côte Rôtie is really smart too, polished and sleek providing immediate pleasure. One of the stars here is the St Joseph, on song and it is an absolute joy of a wine that just flows with drinkability. The smart and charming Rémi started to work alongside his father in 2004 and today is in charge of the domaine along with his wife Krystel. They are the 3rd generation of winemakers and continue the tradition of the estate's refined and pure wines from Viognier and Syrah working from their cellars in Condrieu. The domaine has recently fully converted to organic farming, the wines much like the estate are pristine and pure.

This is one of the original domaines of the Condrieu appellation, and centred on the oldest vineyard, above Condrieu itself and with a decent holding in the Coteau du Chéry, which, with the Coteau du Vernon, is considered one of the best sites. The domaine existed 45 years ago when the whole appellation was just 8 hectares of vines (it's now 160 hectares), under the name Pinchon. Rémi's father Robert married the Pinchon daughter, so now, having been Domaine Niero-Pinchon for a bit, it has been shortened to simply Niero when Rémi took over. The Condrieus come from just over 4 hectares of vines, all in the commune of Condrieu itself, in the parcels Coteau de Chéry, La Roncharde, Côte Chatillon, La Caille, Vergelas and Corbéry. The Condrieus are aged in tank (60%) and barrel (40%) for a year. The Côte-Rôties come from two sites, La Viallière and Le Coteau de Bassenon, from the southern end of the appellation, a total of nearly 2 hectares. They are aged for 16 months in barrel, with 20% new wood. 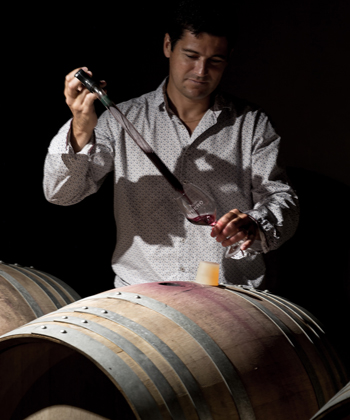